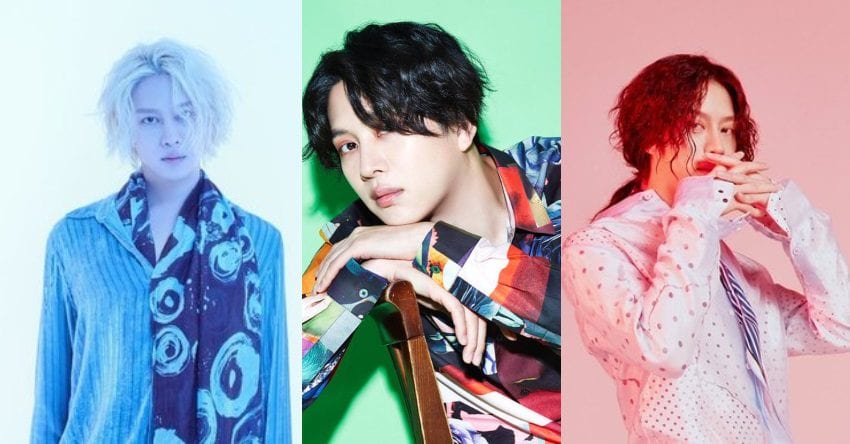 Super Junior‘s Kim Heechul, the “Universal Big Star” and variety show bluechip with both beauty and wit, celebrates his birthday this July 10th! As a celebration of his very special day, we have prepared a list of 7 of his underappreciated yet captivating songs. Check out the list below!

1. Close Ur Mouth (with Jungmo)

We like this music video because it just shows who Heechul is basically: fun-loving, friendly, talented, and witty. The fact that he directed this MV on his own is a major point for us too. Jungmo‘s guitar skills really complements Heechul’s voice. Jungmo and Heechul were known as M&D. (Note: Spot how many of Heechul’s close friends appear in the video)

2. Narcissus (with Jungmo and Mamamoo’s Wheein)

We love everything about this track! Heechul and Mamamoo‘s Wheein‘s voices match perfectly. The storyline of the MV and the lyrics of the song (both done by Heechul) were amazingly created. And of course, Jungmo’s guitar skills are to not be left behind. Model Kim Jin Kyung also stars in the MV.

This song was on Super Junior’s 10th anniversary album, Magic, and the only 83-line (referring to Leeteuk and Heechul who share a birth year) song we have ever been blessed with. It’s a shame really. We want them to record a song again and sing it as beautifully as this! Leeteuk’s voice and Heechul’s rapping skills are well-featured on this track.

This trot-inspired track was composed and arranged by Jungmo with lyrics written by Kim Heechul. The MV is about a fanboy who bravely asks his favorite star to watch their busking performance. Even though the lyrics are sad the MV was so cute to watch. DIA‘s Jung Chaeyeon is featured in the MV.

This is a rock ballad song about a man wanting to express his love to a woman even if it’s through a dream. The MV features Heechul’s real-life lady love, TWICE‘s Momo, and the cast of “Knowing Brothers.” This song rose to the top of the charts upon its release.

Kim Heechul’s first ever solo track after debut! This song is composed by Heechul and Donghae with Shindong as the director. This track is about saying farewell to the one you love while the music video features “Sky Castle” and “Hotel Del Luna” star, Park Yoona.

This is Heechul’s second single with the Buzz vocalist, the duo collectively known as “Universal Cowards.” The song reflects the story of a sad romance. It is a very heartbreaking song and the MV is twice as painful.

Directed by Shindong, the MV is about a mentally-handicapped older brother who played by Heechul and Kyunghoon takes on the role of the younger brother. Jisun from fromis_9, “Knowing Brothers” cast member Lee Sangmin and TV personality Park Misun are featured in the MV.

A personal recommendation from some writers in the WTK group, Heechul’s “Super Show 2” solo performance entitled “Spirit” cannot be left out of the list! According to a Heechul stan who works as a staff and wishes to remain anonymous, “Music? High quality. Looks? High quality. Video resolution? Low quality. Stan Kim Heechul.”

lulu0507 has been a fan of Super Junior since 2009 and is Siwon and Yesung biased! She also became a fan of Monsta X and VAV in 2018, stanning Shownu and St. Van respectively. In her free time, she loves watching variety shows and K-dramas.

Let us know your thoughts on Lay’s new song by tweeting to us @whatthekpop1!