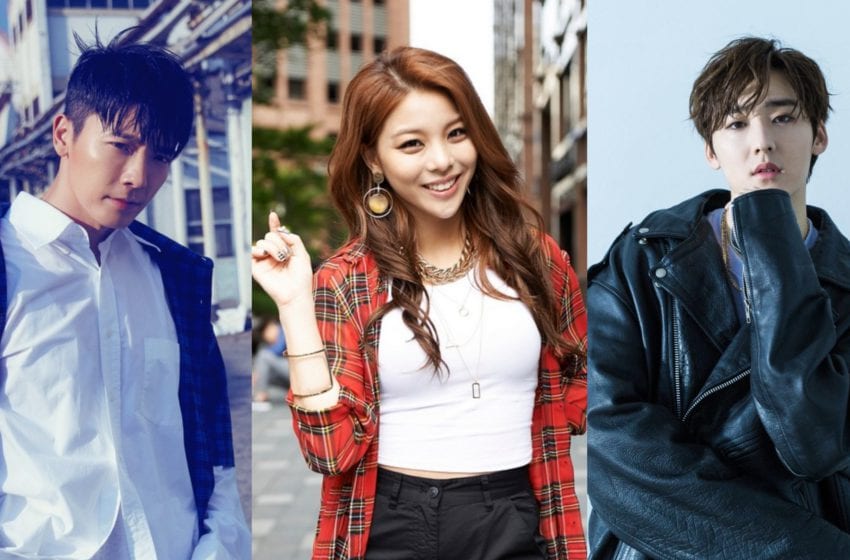 It’s Easter Sunday! As such, many people around the world are celebrating this important day in the Christian faith. Whether you are a Christian or just a fan of great music, we’ve chosen to celebrate this special day by looking back at times when amazing Korean artists from K-pop, hip-hop, and more have used their fame and opportunities to sing about God!

For a previous article about this topic which has some different songs than the ones listed below, click here. Otherwise, keep on reading for 15 times Korean artists sang Christian songs!

As one of the most outspoken Christian in K-pop, Siwon loves to use his solo opportunities at Super Junior concerts to sing about what’s really important to him. At the Super Show 4 tour at the Tokyo Dome, he chose to use his solo stage in front of the massive audience to sing “His Grace Is Enough” with his friend and fellow musician Johnny Lee of 3rd Wave Music.

Another outspoken Christian in K-pop, Kevin doesn’t just tweet Bible verses and faith-based posts to his followers, he actually lives his faith out loud in his everyday life. This English-language song was recorded at his church during some of the earlier days in his career.

3. Sohyang – “Until The Lord Returns”

Sohyang is famous for incredible pitch and gorgeous renditions of songs like “Arirang,” as well as her original tracks. However, Sohyang is also a very religious person and enjoys using her voice in Christian settings and in Gospel music. Check out this beautiful version of “Until The Lord Returns,” a song which talks of doing your best and staying faithful until you meet God face to face. “At the end of way that I’m going on, I will see the Lord, my majesty. Holy God, Glorious God, He will come out to welcome me. Until the Lord returns, I will stand up strong and run until the end.”

Kyuhyun is another Super Junior member who is outspoken about the importance his faith plays in his everyday life. There are numerous videos and photos of the famous singer standing before the small congregation of his family’s church, singing and using his talents for God. Here, he sings a song while his sister plays the violin. Talk about a talented family!

Both Bada and fellow S.E.S. member Eugene are outspoken Christians and are heavily involved in their local churches. Even during their days at SM Entertainment, Bada used her voice to sing this famous Christian song during an SMTOWN album

Eric and Minwoo wrote this original song that was a story of their own lives and how they had struggled with the world before finding peace in God. “Oh, God, I love you Jesus. Thank you for the things You’ve done. All my life, all I had been searching for was You.” Check out a live performance of the song that they did at a concert many years back!

YoonA sang a beautiful rendition of “Amazing Grace” for part of a drama, but it still deserves a spot on the list! YoonA is also known for being dedicated to her Christian faith, which is perhaps why she could deliver such perfect emotion when singing the song. In fact, she was part of a group of Christian celebrities who called themselves “MoonMiEn” and gathered regularly for Bible study and prayer, as well as to do charity work. Other members of the group included Choi Siwon, Lee Donghae, Minzy, SNSD’s Sooyoung, Tiffany, Hyoyeon, and actress Jung Ryeowon.

Another SMTOWN artist who has covered a Christian song, Changmin chose to sing this famous track by artist Sandi Patti during his group’s third Asia tour. The range is super high, and his voice is very impressive as he hits every note with perfect clarity.

Former Wonder Girls member Sunye is one of the most well-known Christians in K-pop. During her time as an idol, she developed a reputation as being very compassionate and charitable, donating her time and money to hospitals and orphanages. Upon leaving the group, she and her husband decided to move to Haiti to become missionaries.

Former 2NE1 member Minzy has long been outspoken about her Christian faith. In fact, she once admitted that she would love to be in the ministry one day in the future.  She stated, “I want to become a pastor who can help children easily connect to Christian culture.” In fact, she enrolled in Baekseok University, a private Christian University in South Korea, in 2015 to study theology. In the video below, she used “Minzy’s TV” to sing the song “Hosanna” by Hillsong.


Donghae is another member of Super Junior who is very vocal about his faith, sharing pictures from his time at church and much more. When he recently made his solo debut, he chose to do so in what many considered an unorthodox manner. Although he is a pop singer and has many fans from all different walks of life and faiths, he chose to make his solo debut with a Gospel song instead. The self-composed song featured BewhY and is about singing together to praise to God.

3rd Wave Music is a contemporary Christian music group from Seoul, made up of Johnny Lee and Fly To The Sky’s Brian Joo. Other K-pop artists, such as former U-KISS member Alexander Eusebio and former Wonder Girls’ member Lim, are also involved in the project for special tracks and appearances. The group has not only recorded albums together, but they’ve also traveled to Christian conferences and meetings to sing for the audiences (as seen in the video below).


BewhY is something of an oddity in the hip-hop world: he’s one of the most famous rappers in Korea who can spit bars with ease and has the respect of almost everyone in the game, but he is also a dedicated Christian who lives a life that he hopes will please God. In this performance on “Show Me The Money 5,” he performed a song entitled “Forever.” The lyrics talk about how is fame is going up and he keeps earning money, bur he won’t ever get caught up in all of that and will forever give God the glory. “I will take over the world, I will keep getting introduced… Even if I won’t get it, I’ll keep walking. I placed all my faith in Jesus. If He wants me to go, I will. If not, I won’t.” Despite the heavy religious message of the song, he still had the room going wild and fellow rappers listening in awe, showing that his style and songs are really something special in the hip-hop world!

Eunkwang has one of the best voices in K-pop, and one of my favorite songs to hear him sing is this gorgeous rendition of “You Know Better Than I,” a song from the soundtrack of the movie “Joseph: King of Dreams” (a film based on the Judeo-Christian story of Joseph). The song talks about trusting God even when you don’t understand His plan. “You know the way, I’ve let go of the need to know why, For you know better than I.”

If you only listen to the lyrics of Bobby’s song “Runaway,” the exact meaning might escape your notice. However, when you watch the music video as well, you will clearly see that the message of the song is about losing yourself in the trappings of the busy world and running back to God in an effort to find peace once more. You can watch the official MV by clicking here, but I like the fan-subtitled version below so you can see both the lyrics and the video at the same time. The song states, “I’ve lost my way. I’m too tired… please hold my hand.”

We really respect the fact that these singers have used a different genre of songs beyond K-pop or hip-hop to reach their fans and touch listeners. What other K-pop idols have you seen sing Christian songs? What is your favorite of the ones listed above? Let us know in the comment section above!

Regardless of your own religious beliefs, we hope you enjoy these beautiful songs from these talented Korean singers! Happy Easter!

lee1086 is the co-founder and director of What The Kpop. When not writing or editing articles, she is watching K-pop music videos or K-dramas. She is a huge fan of Super Junior and the perfection known as Eunsihae. When not obsessing over the flawlessness of Donghae or trying to decide if her SHINee bias is Taemin or Key, she is playing the piano and hanging out with her family and friends