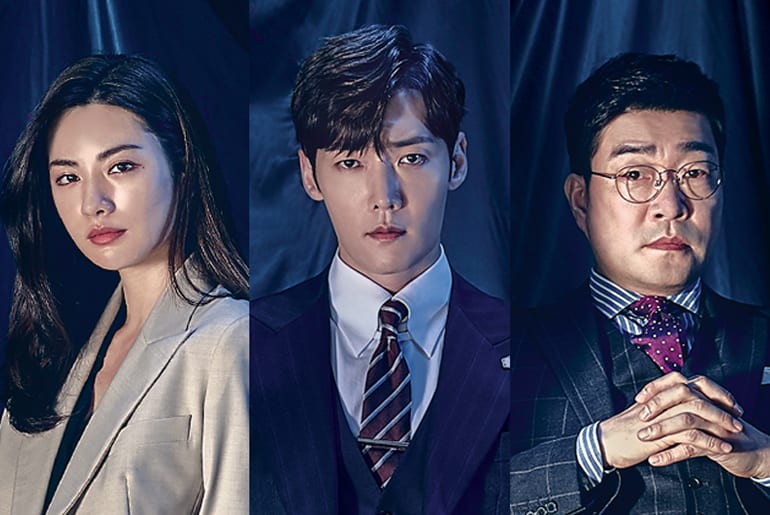 Nothing makes for a good K-drama quite like the story of entitled chaebols and the corrupt politicians who bow down to their every whim!

“Justice,” the legal drama that just concluded today on KBS, centers around the king of eye smiles —Choi Jin Hyuk— in the role of attorney Lee Tae-Kyung. Lee has spent his entire career working on getting guilty criminals out of jail and doing the bidding of the powerful Chairman Song Woo-Yong, darkly played to perfection by Son Hyun Joo. Song has deep ties to the sexual favor industry and those ties have made him a wealthy and very connected man. Politicians serve him with a mix of guilty pleasure and fear from the secrets he has on them all! As his protégé, Attorney Lee lives the life of luxury with no thought of right or wrong and enjoys the lifestyle that only the elite of Seoul can enjoy!

Prosecutor Seo Yun-Ah, played by After School‘s Nana, is idealistic and strives to seek justice and bring honor to her father who serves as the minister of Justice and is immune to compromise. As the story unfolds, we find that she and Attorney Lee once shared a deep relationship that was destroyed by Lee’s choices and lack of morality by helping the most evil of men avoid prosecution. Enter, Vice Chairman Tak Soo-Ho!

Vice Chairman Tak is wickedly played by Park Sung Hoon. This character is one of the most morally corrupt drama characters seen in recent years. He is completely void of values and lives his life at the expense of others. His “hobby” is kidnapping young actresses in training and keeping them locked away until he tires of them and moves on to the next victim. His eerie smile as he torments his victims will give you the chills! You will find yourself waiting anxiously for his demise and cheering for Prosecutor Seo to bring him to true justice!

As in all good dramas, the line up of second characters makes the plot interesting and full. One of my favorite actors in Korea is the loveable Jo Dal Hwan as Nam Won-Ki,  the sidekick and office manager of Attorney Lee. He is loyal to a fault, yet still tries to guide his mentor in the right direction to use his legal talents for good. He brings his irresistible charm to all of his roles and this one is no exception. This star can play anything from a thug to a good guy and manages to play them all convincingly!

All of these characters fight the inevitable war of good versus evil throughout each episode. You will find yourself cheering the prosecutors and eventually Attorney Lee as he begins to see the errors of his ways in protecting the rich at the expense of the less fortunate.

On a side note, the wardrobes are some of the best choices seen in recent legal dramas. Attorney Lee in his impeccably tailored suits and Secretary Nam in his very stylish clothes and expensive shoes (minus the socks) bring casual executive to a whole new level. Prosecutor Seo looks professional, yet stylish, in her office attire and remains well-dressed and put together throughout the show— even as she helps chase the bad guys through the back alleys of Korea. Chairman Song looks ready to rule over a board meeting in his expensive luxury suits and ties even as he wreaks havoc in the legal world! Attention was paid to small details in every outfit to really bring the details of their characters to life. Kudos to this wardrobe department for an often overlooked job well done!

You will enjoy this very well-acted drama for the cast, the plot, and the hope that justice really does conquer all. In the process, you may even find that lasting friendships can be made across the legal lines of the courtroom! I give this drama four finger hearts for bringing it all together perfectly in 16 episodes!

Did you watch “Justice”? What did you think of this drama? Let us know your thoughts by tweeting to us @whatthekpop1!

DramaElf is a dedicated lover of K-dramas. Not a night goes by without finding her in front of her Kindle, eagerly watching the newest drama. She is a particular fan of Gong Hyo Jin and Shin Min Ah. Although dramas are her biggest fascination, she is also a fan of Kpop and particularly loves Super Junior and SISTAR. Despite being a mom of two and grams of three, she can still fangirl with the best of them when it comes to her ultimate bias Leeteuk.