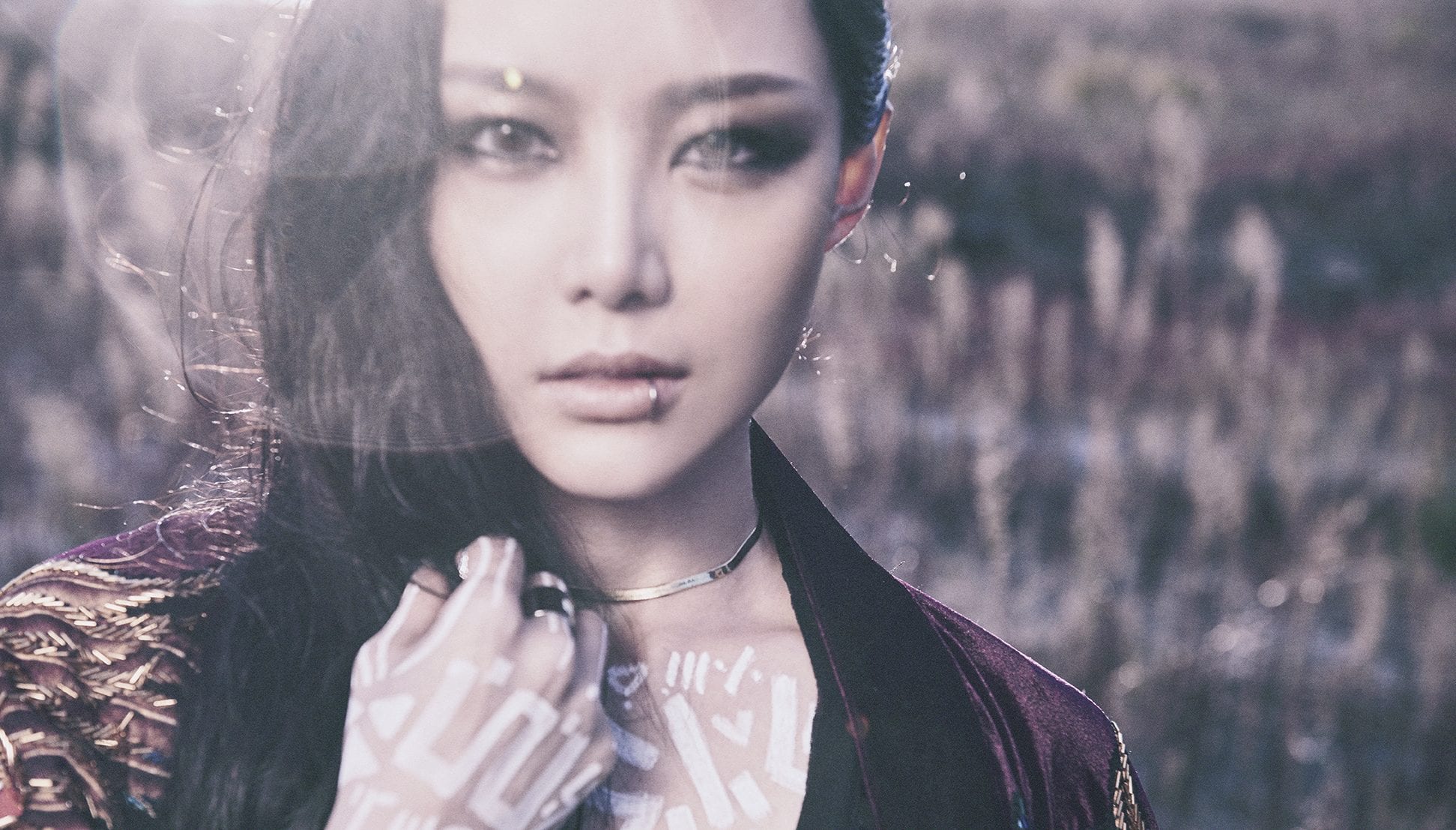 What The Kpop recently sat down with Brown Eyed Girls‘ Miryo to chat about her solo activities, successful YouTube channel, group promotions, and more. Arriving for the interview at the office of her label Mystic Story (formerly known as Mystic Entertainment), it immediately became clear just how friendly, down to earth, and charming this talented artist was in real life. She is bubbly and bright and gets easily excited when talking about gaming, yet this fierce female showed just how much of a vision she has for the future and what it is that sets her apart from the rest of the artists in the hip-hop world.

Humble and kind, it’s no wonder Miryo has remained a popular figure since her official debut with Brown Eyed Girls in 2006. Before that, Miryo made her first appearance in the music world as part of an underground hip-hop group called Honey Family. After the group disbanded, she went on to feature on various tracks for artists like MC Mong and Gill of Leessang.

These days, the rapper and celebrity figure keeps busy on her social media channels where she releases video content and drops her own mixtapes and tracks. With her famous girl group set to make a comeback this year, it’s no wonder new K-pop fans are looking to learn more about this fierce rapper and lovely star!

WTK: Fans are so excited to know that Brown Eyed Girls will soon be making a comeback! How are preparations going?

M: Well, we are planning to release the album this year and are currently working on the songs. There is still something [else] we are working on as well. We can’t mention what it will be, but you can find out when it is released!

WTK: What is your favorite part of working as a group again?

WTK: When you guys are on a break from group activities, do you still get to spend time together and hang out?

M: We do stay in touch. They come over to my house to hang out or we go drink at a bar. We spend time together like that. I posted our year-end party on Instagram. Ga-in showed me the Snow app, and we played with this app together. I’d heard of the app since it was popular, so we had a lot of fun [with that]. Actually, I wanted to make a collage on the Snow app with all the pictures of our members, but they didn’t like because I looked the most beautiful. (laughs) So, instead I just posted another photo on Instagram.

WTK: You’re speaking a lot in English today! Have you ever spent much time in North America?

M: Actually, I lived in Vancouver for a short time— like nine months.

WTK: You were a judge on the first season of the hit show “Show Me the Money.” In fact, you were the only female judge on the male-dominated show. What was this experience like, and what do you think of the recent increase of female artists in the hip-hop world?

M: I was kind of lonely, but the judges took care of me as I was the only women there. Frankly, it was a tough season at that time just because of some personal reasons. Concerning my personal story, I had released the title track “Dirty” from my album a few months before. I wanted the album to be a hit, but [in the end] it wasn’t. So, despite this situation, I participated in “Show Me The Money.” However, my mind couldn’t concentrate fully on everything related to the show. I was thinking more about my own musical talent and asking myself “Am I a good artist? Is it really ok [being like this]?”

[As far as the other question], I really appreciate that there are more female hip-hop artists than ever before, but this number is still so much lower than male artists.

WTK: What’s your favorite part of being on shows like “Show Me the Money”?

M: Both “Show Me the Money” and “Unpretty Rapstar” are survival programs, and it was really tough participating. So, I decided I would never do those shows again after finishing “Show Me the Money.” I kept rejecting requests, but I entered “Unpretty Rapstar” eventually. The show had asked me to participate starting in season one, but I went on season three. At that time, I hated even thinking about shooting the program with the other girls. People are scared of me, but I’m actually more scared of other people. However, they were all sweet and nice. I think the power of editing a broadcast is also powerful. I don’t why know, but I recall the memories of “Unpretty Rapstar” much more clearly than those of “Show Me the Money.”

WTK: Do you have any advice for those that want to pursue a career in music?

M: Think positively. Don’t question the decision by asking “What if my career isn’t successful?” or saying things like “I can’t make it” or “Why can I only do this much?” Just be thankful and happy that you are doing what you love to do.

WTK: You’re known as a big gamer and even have your own Twitch and YouTube accounts. What is your favorite game these days?

M: I used to play League of Legends five years ago, but when Overwatch came out, I played Overwatch and stopped playing League of Legends. Then one or two years later, PlayerUnknown’s Battlegrounds (PUBG) came out. I started playing PUBG and stopped playing Overwatch, but now I’m playing League of Legends again. I really like it, and you know what? I’m much, much better than before! I normally play and focus on one game at a time. Five years ago, I was a super beginner and newbie, so when I first played, I only played as a supporter to other players. During that time, most of the players would blame me a lot. When playing games like this in Korea, people blame someone who doesn’t play well. But these days, I don’t support anymore and play jungling or mid lane. I do so well! Five years ago, I thought I was not good at playing, so I only played as a supporter at that time. But this time, I don’t think about that and just play, and I found out I’m sooooo good! So, guys, think positive! Don’t set limits for your potential. I realized this [lesson] from gaming. You can do anything.

M: Well, I like watching movies, listening to music, reading books, and playing games— but I believe people already know this about me. Nothing else, I think. Ummm, working out? Taking a walk while listening to music on a sunny day?

WTK: Where do you see yourself in ten years?

M: (looks at the WTK staff who is translating) May I ask your name?

M: Well, what would you say, Eddy?

WTK: Besides having a good career, I would like to have a big house and a family.

M: Well to me, I want to be the leader of a label, so that there are people who will be very creative and have good, positive energy which can spread out to the world. I want to make the world a better place with positive energy through those people. It would basically be centered on rap, but I don’t want to stick to one specific genre. Hip-hop will be our base, but we will also try pop, alternative rock, R&B, and beautiful and creative music… it would be a label, but it would feel more like a crew. As I do my own broadcasts [also], I hope things continue to go well and that I can give people happiness, positive energy, and help to entertain them. I also want Brown Eyed Girls to continue for ten more years together!

WTK: We had a contest for fans to be able to ask you a question. The winner was Justine, and she sent in a video question. We’ll show it to you, then you can answer.

M: Well, it is better to ask if I have a bucket list first. (laughs) It is common to say like “I want to do this” or “I want to do that,” but I want to have a relationship to surprise the world. Is there a different word besides surprise or scandal? How about shocking? [I want to] shock the world. My fans don’t know this about me, but I’m not an outgoing person and haven’t had a relationship in a long time. So [first I should] make the bucket list, then [I should add that I want to] have a relationship like this. I would like to have an amazing relationship! It would be good if my boyfriend could play games with me. But you know what? Typically, it is rare for someone to be both handsome and play games well. (laughs)

WTK: Any last words to our readers?

M: First, I appreciate you coming here [to meet me] for my interview. I was happy and thankful to have this interview. I wish everyone will have a wonderful [rest of the] year. I can’t tell you yet when our album will be released, because even though we have arranged the schedule, delays sometimes happen. But I will let you know when it’s ready!

Miryo is undoubtedly one of the best female rappers in the business and has a strong determination to accomplish many things while also making the world a better place. When you combine this fierce dedication to her art with her genuine kindness and compassion for the world, the result is a strong female hero for all music fans today.

Stay tuned for more great music from both Miryo and her group Brown Eyed Girls! In the meantime, you can stay in touch with Miryo by following her YouTube channel found here or her SoundCloud account found here. You can also click here to follow the group’s label Mystic Story in order to keep up to date with news of both the members’ solo activities and the group’s comeback.

Many thanks to both Miryo and Mystic Story for allowing us this interview in order to bring our readers news of this amazing star!

What do you think of this interview with Miryo? Are you surprised by any of her answers? Let us know your thoughts by tweeting to us @whatthekpop1!

Media: Mystic Story
WTK Staff and Translator: Natasha and Eddy
*The information in this article has been edited for clarity.