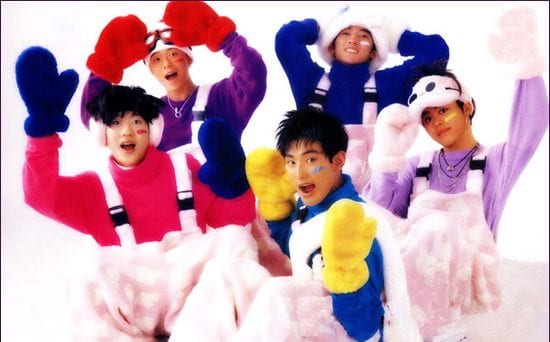 *This article has been updated since its original publish date.

For this issue of WTKpop Throwback, let’s go way back! In fact, let’s return to the group that’s largely considered to be the first true Kpop boy band and idols of their time: H.O.T!

H.O.T (High Five Of Teenagers) was one of the first groups pioneered by SM Entertainment back in 1996 and is made up of Moon Hee-jun, Jang Woo-hyuk, Tony An, Kangta, and Lee Jae Woon. These boys are classic idols in the Kpop business. They are the ones who started in all and allowed the idols we see today to exist. Although other groups achieved great popularity a few years prior to H.O.T, it wasn’t until the group’s debut that modern Kpop culture and idols groups became so successful!

Korean music wouldn’t have been the same without H.O.T. These boys started the quintessential “requirements” of Kpop: matching outfits, choreographed dancing, catchy music, and super good looks. H.O.T. truly set the Kpop boat in motion, so let’s celebrate these legends by taking a look back on some of their greatest hits!

We Hate All Kinds of Violence – “Candy”

H.O.T. dominated the airwaves with “Candy” (off of their album We Hate All Kinds of Violence) back in 1996, but it’s funny to see how far Kpop has come since the days of H.O.T. I mean wow, this has to be the corniest of all corny songs. I don’t mean to insult H.O.T, of course. I’m definitely not doing that since we all love a good dose of corny from time to time, but it’s funny to see what was cool back then. Researching for this article made me a little nostalgic. The MV has H.O.T. dressed up as a fusion between clowns and painters. I truly can’t describe what they’re wearing. Just look at the feature image at the top of this article. The boys wear big, fluffy oven mitts with jerseys and plain, white overalls. They look like children’s show characters. I think H.O.T is supposed to be at Disneyland too. All jokes aside, the song is very campy and silly. It’s totally 1996 in all its glory, and you can’t hate the song. In fact, it’s still a classic, popular song in Korea today! It’s so much fun to listen to. In addition, it’s funny to look at the “first” Kpop MV. It’s a dorky song with rap interludes and hip-hop beats from singers who are dressed up as “Sesame Street” puppets.

Now, we have “Wolf and Sheep.” H.O.T. stepped away from the “silly boy” phase and entered into the “bad boy” phase. The boys changed up their look for this album by wearing clothes ten sizes too big. The MV was shot in what looks like Venice Beach, California. The boys channel their inner Backstreet Boys during the chorus ballad, and switch back to N.W.A for the rest of the song.

H.O.T. was experimenting with this track, trying out a completely new genre of music. I can respect that. But, this song is like Poochy from the Simpsons. The attempts at being hardcore are hilariously quaint. I’m sorry, readers, I don’t mean to tease but this MV is a time capsule for the 90s. It’s funny to see the boys dressed in clothes that were way too big. In fact, I keep expecting Moon Hee-joon to do the Macarena.

Despite their dorkiness, I have to give H.O.T. major props for always trying out new sounds. I guess this was the Kpop industry throwing stuff against the wall and seeing what sticks, and H.O.T. was SM Entertainment’s guinea pig. Because in this song, we were treated to a Gothic-rap sound in “Line Up!”

During the 90s, rock music was messing around with rap and producing unique sounds. I guess someone at SM Entertainment heard this new sound and decided to give it a shot. What we have with H.O.T is like the Nine Inch Nails meets Biggie Smalls. The MV is in a Gothic castle and the boys are dressed up in leather suits. The song is overbearing and dark with the smoothness of R&B-rap. It’s an interesting combination that at this point we’ve heard a hundred times, but back then it was a crazy new sound. The choreography is a lot better too. It’s not the goofy flailing about like in “Candy” or the random hand motions of “Wolf and Sheep.” Now, H.O.T is dancing and looking cool. Also, their outfits remind me of Final Fantasy 15. Maybe Tetsuya Nomura was inspired by H.O.T. a full five years before the game was released. The song is alright, but the choreography is what sells the MV.

Outside Castle – “We Can Do It”

Finally, we’ll focus on the last major single by H.O.T.— “We Can Do It.” And what a weird song to have as their last major single! It sounds so normal. It’s the type of song that you would expect from a boy band. It’s fun, modern and has a typical pop sound. It sounds similar to what you would hear today. I didn’t mention their previous single “Git It Up,” but that song was all over the place. However, “We Can Do It” is focused. The song was made with care.  “We Can Do It” has some light hip-hop elements mixed with a bouncy beat. It’s not as extravagant as today’s Kpop and not as experimental as H.O.T.’s previous songs. It’s what you would expect from a starting boy band to release at the start of their careers. It’s weird to see H.O.T. release crazy songs then end with something so normal. While it’s a good song, it was kind of sad to see H.O.T. go out on a note like this after all their experimentation. However, it did reflect the sound that would soon hit with full force the next generation of Kpop groups.

Unfortunately, H.O.T. officially disbanded in 2001, and the boys never released another song together. All of them went on to solo careers and succeeded there. The group was active from their debut in 1996 and was one of the most successful groups at the time. They were only the second group to have an album become a million seller and ended up selling a total of 12 million records, an extremely amazing feat at the time!  They released a total of five studio albums and three live albums.

No one knew exactly why the group broke up until 2010 when former member Kangta, who is still at SMTOWN today as a soloist, songwriter and record producer, went on the talk show “Kneedrop Guru” and discussed what happened. He said that they were all so young and inexperienced when they had signed the contracts, and many of the parents ended up not liking the results. So, some of those parents pulled their sons out and essentially destroyed the band (at least that is my understanding of what Kangta said).

However, even after  disbanding, many of the members said they would love to get back together. In fact, that moment is finally right around the corner! After a successful mini-reunion on the show “Infinite Challenge” earlier this year, the group announced they will hold a special reunion concert October 13th-14th at the Seoul Olympic Stadium in Jamsil Sports Complex. The group also just opened an official Instagram account were you can get ticket information for their upcoming show!

What do you guys think of H.O.T.? Are you excited for their reunion concert? Let us know your thoughts in the comment section below!

Is there any other early Kpop group you would like to see featured in WTKpop Throwback? Let us know!


KyeongJun is a writer for WTK, where he gushes about his love for Korean rock music (You guys need to listen to Jaurim). When not writing, he’s at the gym listening to the newest K-Rock bands.  You can catch KyeongJun @ElCrazy_Diamond on Twitter (Don’t worry that it’s a bit barren—he’ll soon be posting regularly! You can also Tweet him if you know any cool new artists you would recommend!