G-Dragon, the leader and resident fashionista of the group BIGBANG, released his newest clothing line for PEACEMINUSONE. The line was designed by the artist himself, along with his stylist GeeEun.

The label is sparking a lot of controversy due to a message on the tags of his clothing that some fans are calling misogynistic. The label is clear: if you can’t follow the directions on laundering your clothes, just give it to your mother. Though this does raise the question as to why  one’s mother has to do the laundry, there is still a sense of sly sarcasm that is just part of G-Dragon’s personality. 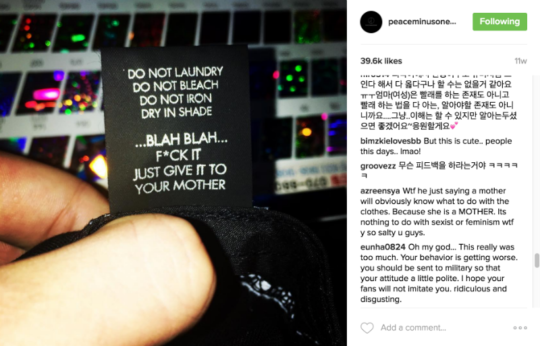 The clothing line is also receiving criticism for its high prices, with fans saying he should have made the items more affordable so more people could purchase the clothes. Other fans are defending G-Dragon and his branding choices, saying that he loves luxurious, high-end clothing, so it makes sense for him to design a high-end line of clothes himself. Although the items in the line are in fact expensive, this is also a line that G-Dragon designed as part of his love for fashion and not for the benefit of his Kpop fans.

The clothes G-Dragon designed are full of rebellion and self expression, yet maintain a sense of quality and class.

Though most products on his site are already sold out, there are still some left. The prices are tailored more for the high fashion crowd, with the style promoting a blend of the unique and daring.

With products like the PMO Shoe Lace Cap #1, there is a sense of wondering how someone puts worth on such a simple idea. However, the product is being sold for almost $200, with most colors sold out online. In general, the rest of the line also follow a simple, minimalist design with a modern flair.

Decide for yourself if you find G-Dragon’s sense of apostasy that is translated into his clothes worth it at the official PEACEMINUSONE store.

Kim (Paradoxicalsuds) is a writer for What the Kpop and has been a devoted K-Pop fan for almost ten years. An avid SNSD, GOT7, FTIsland, and AOA fan, Kim has been in love with K-Pop since the original debut of TVXQ. While she watches new MVs or K-Dramas on her laptop, Kim enjoys tea, begging for affection from her cat, making jewelry, and writing fiction.