On October 11th, EXO arrived at Incheon Airport to board a plane to Japan for their upcoming solo concert. However, things took an unexpected turn when Lay fainted from what SM Entertainment has now reported as exhaustion. Several live fan accounts on social media stated that he would not wake up even after being fanned, and that he was subsequently rushed to a hospital. 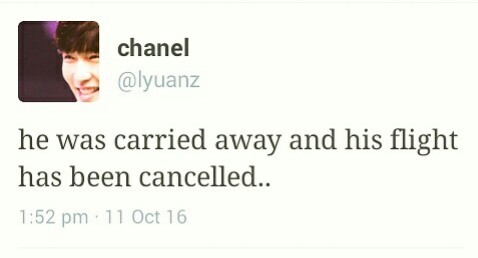 In an official statement, SM Entertainment reported, “Lay briefly fainted due to a lack of sleep. According to the doctor, he will be fine after he gets enough rest. Lay will be returning to the dorm in order to take a break and get some rest.”

Regarding the upcoming concerts on the 12th and 13th of October at the Makomanai Sekisui Heim Ice Arena, SM stated that Lay “has strong intentions of joining the concert, so we plan to make the final decision after assessing his condition.” Through a Naver V Live chat, fellow member Kai informed fans: “Lay hyung* is ill and didn’t get on the plane with us. I know you all must be worried, but I think he’s okay. He will probably take a flight here tomorrow.”

A similar incident occurred last May, when the EXO member passed out during the filming of a Chinese variety show. The variety show staff stated that it was due to exhaustion and fatigue.

After confirming Lay’s safety, the rest of the EXO members decided to depart to Japan for their solo concert.

We at the What The K-Pop wish Lay a speedy recovery!