In an interview with Beijing Youth Weekly Magazine, famous Chinese artist Han Geng expressed his desire to reunite once more with his former group Super Junior.

As the 10th anniversary of their debut was approaching, plans of releasing an EP album with the group was in mind, along with 6 months of promotions. Even with high anticipations for this reunion though, nothing came out of it as there was not enough capacity to accommodate both sides.

Since Han Geng left the group in 2009, there has not been much interaction between him and his former members. It seem as if time has helped heal some wounds however, as recently they have been spotted together and Han Geng is now openly expressing his desire to perform with them again.

The magazine also briefly mentioned the effects of his lawsuit with SM Entertainment on the foreign market and Han Geng’s reunion with Super Junior’s Choi Siwon back at Jackie Chan‘s birthday event. It was the first public reunion with a Super Junior member in the many years since Han Geng left the group.  When a photo of the two greeting each other was released, most fans went wild, showing that they still consider Han Geng an important part of Super Junior’s history and hoping for a full reconciliation in time.

Check out the full, in-depth interview below. The translation is provided courtesy of WorldwideELFs.

“Q:  The fans are hoping for Super Junior to be together again. Is there a possibility for all 13 members to reunite for a performance?

A: I would like to as well. Just like last year, it was the 10th anniversary. I gave Mr. Long hyung a call and I called Leeteuk as well. I told him that it’s been 10 years and I would like everyone in Super Junior to release an EP together, and after this EP album is released, we’d do half a year of activities, not for anything else, other than to just commemorate that we’ve been together for 10 years. In the end, it didn’t happen because we couldn’t work out our schedules. This is also something that I have been regretting.

It’s been 10 years since I have debuted with the members, so I really wanted to do something. That’s why I wanted to do such an outrageous concert (of all 13 members coming back together). I went over to Korea over the new-year period and I had a meal with Heechul and some friends. During the dinner, I called Leeteuk and Kangin to tell them about my idea and everyone shared my thoughts of regrouping and doing the concert. We even told our managers and asked the company but they were too busy, which was a shame.”

At the end of 2009, after debuting for 4 years in Korea, Han Geng returned to China after terminating his contract.

Han Geng’s contract with his previous company was declared null and void because of some “slave agreements.” Following the exposure of some of the unfair terms and conditions, Korea’s law on entertainment companies’ unfair contracts were reviewed and became stricter. It is not an exaggeration to say that Hangeng’s lawsuit improved the law (regarding slave contracts) in Korea. Since then, many celebrities have received better treatment from their companies and have been better managed and promoted because of his lawsuit.

Han Geng rarely mentioned that matter (lawsuit) and also the group he was in previously, his bandmates and his Korean friends. However, on November 6, 2015, the 10th anniversary of of his debut, he posted pictures of him in his group (Super Junior).

Han Geng’s 10 year career, from his days of being known as Super Junior’s Chinese member and Super Junior M’s leader “Hankyung,” to popular singer and actor “Hangeng,” has been a huge success. During the anniversary of his debut, it seems those affectionate memories of his days with the Super Junior members were brought to his mind once more.

Time is like bitter medicine. It made us forget the pain, yet remember the beauty of yesterday. From time to time, there will no doubt be photos of Hang Geng and his past bandmates together again. In one of his activities in China, Hangeng and Choi Siwon were on the same stage. They shook hands and hugged. The scene was just like that time when they appeared on “Happy Camp.”

Out of the members in the group, Han Geng was always closes to Kim Heechul. Their friendship was always strong, and they never failed fo move fans with their genuine affection for each other.

Han Geng revealed in an interview that no matter what, he will always be friends with his past group mates. We do not know whether fans will be able to see Super Junior as 13 again, but at least (like his fans) Han Geng is also hopeful that day will come.”

Tell us what you thought in the comments below on this matter. Do you want to see Super Junior as 13 again? 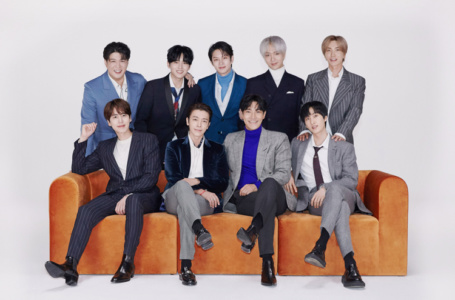