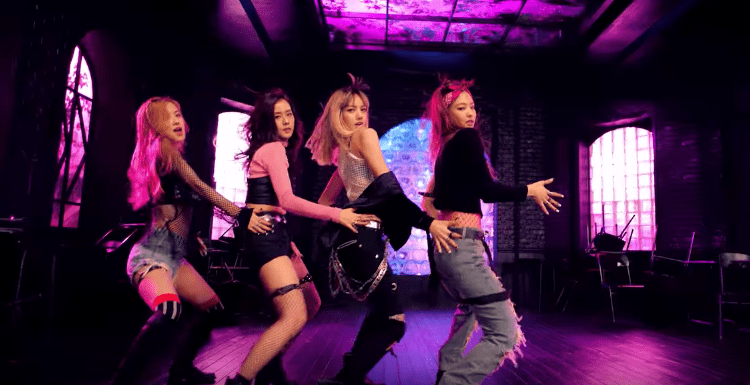 YG Entertainment‘s new girl group just debuted and BLACKPINK is already taking over the charts with their debut tracks! What The Kpop is here to break down the songs and give you a more in depth view at the group’s MVs.

Starting with “Boombayah,” BLACKPINK rides in on extended mopeds with boom boxes and what looks to be a record player on Jennie’s moped, setting their atmosphere as both girly and dangerously sexy. The beginning is bright and intriguing, with strong impressions from both the group’s leader Jennie and the maknae Lisa. Jennie proves that her six years as a YG trainee paid off as she shows off her hip YG-style rap and her rebel-without-a-cause attitude. Meanwhile, Jisoo is more than just a pretty face. Her smooth voice elevates the beat and creates flow from one verse to the next. Rhythm could be Lisa’s best asset, not just in her dancing, but in how she delivers her raps as well. Her part before the chorus gives the viewer a foreshadow of her rap to come. The main vocalist Rose belts out her effortless vocals while adding diva color to the build-up before the chorus.

The choreography during the chorus is strong, simple, and sexy. Easy to follow, the moves can be done by anyone… young or old! Each member hits their moves with fierce intensity and a sex appeal unlike most K-Pop girl groups their age. The chorus itself is catchy and also easy to follow. Beware though! It will get stuck in your head, especially if you have been watching the MV more than once.

The video is not without a controversial note however. During the chorus, the girls call out with a Native American sounding war cry— between their “ya eeya ya” and cutesy “Oppa!” It might have gone unnoticed had they not put their hands in front of their mouths while doing the war cry and later danced in a circle similar to that of some Native American tribes. Despite this, most people who noticed the issue did not seem to make a big deal over it. However, there are still those who find it offensive. Personally, as someone with very little Navajo blood, I didn’t mind the war cry. However, they could have been more aware of the fact that the choreography could be offensive.

Besides that, Lisa’s Rambo rap is the highlight of the song. Her Thai street-style rapping, mixed with her hard-core baby-doll attitude, ignites the song with its fast paced rhythm and feminine street-wise tone. Decked out in her TLC styled pants and mini tank, Lisa clearly sets her position as main dancer. Her moves are on point and flow well with each transition. Following her rap is Jisoo’s solo, bringing class and sparkling sass to the second verse. Her easygoing yet high-society demure captivates the audience as her voice bridges Lisa’s rap to Jennie’s pumped vocal solo.

The most shocking part of the choreography is not all the sensual moves, nor Lisa’s ability to keep the pace moving, but rather Rose’s back paddle under the other members’ legs. Though not executed as sensual, the move raises eyebrows and makes one wonder how she didn’t get back burns from the floor.

The video continues to keep its high energy and ends with a nice high pitched “ah-oo” to stick in people’s minds. Overall, I’d give the song and MV four out of five stars. The high energy, the cute yet devious attitudes and the rapping and vocal talents make the song and MV well worth its (so far) 10 million views. My only criticism is the choreography surrounding the war cry. If their hands weren’t in front of their mouths like a 1950’s Hollywood white actor playing a Native American, and if they hadn’t danced in a circle, then I would have given the MV a full five stars. The song itself received four because it could have been even more special if they had extended both Lisa’s and Jennie’s raps.

Now onto “Whistle.” With an opening line like “make him whistle like a missile, bomb bomb,” you know the song is going to play into sexual innuendos and cheeky teasing. After a series of gamer related images and a trippy intro from Lisa, Rose sits on top of the world, crooning melodic notes and looking chill and fresh. Lisa and Jisoo are then seen looking at one another over a plant, while Lisa continues her baby-doll theme with her sweet, smoky voice. Jennie is shown onscreen sitting on her black velvet, gold-trimmed throne at the end of a burning hallway. She delvers her rap in an effortless fashion using her YG training to make the most out of a little.

Once again, Rose is in charge of the build-up with Jisoo supporting into the chorus. The chorus is simple in this song as well, with the whistle as the main focus and the choreography (though a bit more complex than “Boombayah”) going well with the catchy beat. This song defiantly rides the alternative train with licks comparative to that of Lorde and Grimes and with their various Lolita concepts.

A nice surprise? Jennie’s husky vocals in the second verse and the bridge. Jisoo follows with her serene voice and hip lyrics and is a nice contrast to both Jennie’s dark voice and Rose’s diva vocals. Lisa then brings a CL-styled rap, but instead of delivering it exactly like her sunbae, she adds her own particular flavor. This flavor (in my opinion) will prove very popular and will soon set her own style to be admired. The bridge is a nice swing to the ending chorus, giving the viewer a definite character to encompass the song.

Overall, I give both MV and song five out five stars. The music video is visually stunning and its subtle Lolita themes such as Lisa’s baby-doll dress and their 1960’s fashion is definitely worth watching!. The song itself is catchy and full of flavor and girl power. All the ingredients of a great song to me.

YG’s newest girl group is definitely making strides and seem like they will become super popular in the near future. I’ll be looking forward to seeing what talents they will develop and what talents they can already showcase. In the meantime, if you haven’t already, check out BLACKPINK’s “Boombayah” and “Whistle,” and let us know in the comments what you think of them!

Kim (Paradoxicalsuds) is a writer for What the Kpop and has been a devoted K-Pop fan for almost ten years. An avid SNSD, GOT7, FTIsland, and AOA fan, Kim has been in love with K-Pop since the original debut of TVXQ. While she watches new MVs or K-Dramas on her laptop, Kim enjoys tea, begging for affection from her cat, making jewelry, and writing fiction.